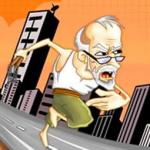 Grandpa Run 3D, This grandfather is fast on his feet and he's making a break for it! ... his enemies while he dodges cars and collects coins in this running game?

Play the most Addictive Running game Grandpa Run 3D on Friv4school 2021, Grandpa has been locked away in the mental hospital, he is plotting to escape, and he needs your help to guide him through the streets once he is busted out!

Help the mentally ill grandpa run away from his doctor in this funny endless runner game. Guide the poor old man through the streets in Grandpa Run 3D! Avoid obstacles and try to collect as many coins as you can!

Grandpa Run 3D is a skill-based endless runner game where you take control of a mentally-ill grandpa who just escaped the mental hospital. In this game, your goal is to simply travel as far as you can and collect as many coins as you can to make it to the leader board. Collected coins can be used to purchase temporary power ups and boosts that will help you in the next game. Try to avoid garbage cans and approaching cars as you navigate your way through the busy streets.

Make remarks on the game and give it 5 stars. Introduce it to buddies. Join sports games such as Chroma Challenge and Red Panda Surfer at Friv4school2021.net