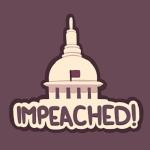 "A Hilarious, yet Serious, game that challenges your ability to create "deeds" as dastardly as those concocted by Bush and his band of Criminals. The Pursuit of Oil will force you to Lie, Cheat, and Steal.

As the new president of The United Republic of the People's Territories of States, it is your noble duty to set your nation down the right path by signing executive orders. But will everyone agree with your decisions? Will your answers satisfy the republic or will they leave you IMPEACHED!

You'll soon find that it isn't easy being a Crook, as Federal Prison looms ever near. You might even find yourself being sent to the Iraq War or better yet, IMPEACHED!"

If you make too many wrong decisions as the president the people will become unhappy and eventually want change. If too many of them group together they will try to impeach you as president! Don’t let that happen by making good decisions. Good luck!

Did you like playing Impeached!? Then also play our other simulation games such as Hanger & Tube Clicker.