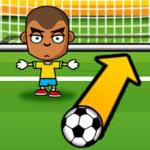 Penalty 2014 at friv to play is a soccer game where players can compete in penalty shootouts with any of the teams that have classified for the 2014 World Cup in Brazil. Beat the keeper by scoring more goals than he deflects within three minutes. Fight an exciting penalty duel, right by the beach at the Copacabana. Don't let the sunshine and the ocean distract you. If you have more goals, you win!

Start the competition and see how far you can go, and if you lose don’t give up, just try again, you are already better and chances to win are greater!In the game at Friv games, you can choose between teams, such as Spain, England, Brazil, Argentina, Colombia, Mexico or Portugal, and you can compete using their players against the rest of the teams. However, you won't play games, you'll just go directly to the penalty shootouts.

In order to take a penalty shot, you have to adjust three different things: the force of the shot, the height, and the direction. If you are able to trick the goalie with your shot and the shot isn't to weak or too strong, then you'll get a goal. Enjoy one of the most exciting parts of any game in the World Cup: the penalty shootouts.

If you are a loyal fan of this type of game, don’t forget to express your love by rate it highly and share it with your relatives. Play more funny games like Yeti Sensation and Amazing Cube Adventure at friv-2021.com/

Use mouse to interact, select angle and power of your shoot