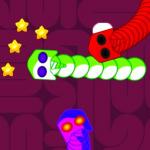 SLITHER.IO- click to play online for free at friv.

Do you like snakes? It's cool if you don't, because these snakes are no threat to you - other players, on the other hand... Enjoy a twist on an old classic with Slither.io! Like the classic game Snake that graced ancient cell phones and computers for decades, you grow by eating small pellets. But with its multiplayer gameplay, you now get the same action while competing against other people. Feel free to chow down on your smaller enemies, but remember that there's always a bigger fish... er, snake.

Slither.io is, in spirit at least, the sequel of Agario. You grow by eating little circles. Kill other players to eat all their mass. Can you reach the leaderboard? If you like it, try out other io games, such as Cocky.io,  Wormax.io, facepunchio and Narwhaleio as well! There's also the amazing game LITTLE BIG SNAKE , which has similar gameplay at http://friv4school2021.net/ , but takes Slither.io to the next level!.

Slither.io is available through a web browser, Android, and iOS.

Slither.io was developed by Steve Howse, a 32-year-old developer from Michigan who had previously developed Circle Push and Flappy 2048 Extreme. His company is called Lowtech Studios.

Mouse: Move your cursor to control the direction of your snake. Click to go at full speed.

Keyboard: Snakes can also be controlled using the arrow keys:

It's best to go into fullscreen mode when using the arrow keys to prevent unwanted scrolling using the button on the right hand side below the game.