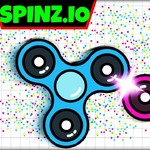 Spinz.io is a fidget spinner .IO game at friv game! Like in Agar.io, enter the arena and battle other players with your fidget spinner. In the game, your main mission is to collect colorful dots, scattered all over the playfield, but this time you have to control a fidget spinner! Move your spinner through the map. Try to collect scattered dots to increase your RPM as many dots as possible. Have a great time!

Especially, in the game at friv Games play, you can choose its color and enter into exciting fights! In additon, if the another spinner with the much higher RPM number hits you, you'll die and give up all your points. Don't panic! Every time another player comes near you. Because, if the difference between your score and the score of the player who hit you, is not very big you won't die, but you both will loose some amount of the points. Also, you can also collide with other players to receive their points, but pay attention at their RPM number which is depicted under each fidget spinner. The player with the highest RPM becomes the leader of the game, his/ her name appears on the top of the rating list. The faster your spinner rotates the stronger it draws dots.

In the game, you can also invite friends and compete against each other for more fun. All you have to do is to share a link that you will find in the left bottom corner of the screen. Enjoy more great games at http://friv4school2021.net/ like Barbs.io and Superhex.io. Don’t be afraid! If you can’t get enough of this game, recommend it to your siblings and good friends. Comment and rate it! Give it a good shot!

Use the mouse to move the spinner