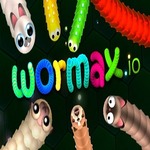 Wormax.io- click to play online for free at friv 2021.

Wormax.io game, this is basically a clone of slither.io, but with skills and nice looking graphics and skins on Kizi 2021 games. At first glance, Wormaxio looks remarkably similar to the other worm-based online multiplayer io games. Even the graphics are similar to games such as Slither IO or Wormate IO, with the worms in Wormaxio depicted as colorful caricatures with two cartoonish eyes at the front of their body. However, where Wormax.io stands out is the improvements it makes to the genre, creating a game that is more tactical than any of its predecessors. Play with millions of players around the world and try to become the largest worm of the day!

Also you should play Ultimate IO games, the hottest games of 2021 at friv-2021.com. Enjoy!

Use skills with Q, W and E.